Posted on December 11, 2012 by maltbyblogger

From his website, Kevin Barron’s response to Osbourne’s Autumn Statement :

“… the Chancellor George Osborne delivered his Autumn Statement to the House of Commons.
In a packed chamber he announced that further cuts to Whitehall departments would release extra money for amongst other things, education. I have written to the Education Secretary asking whether this means that two schools in the Rother Valley, Aston Academy and Hilltop School, which lost out when the Building Schools for the Future Programme was scrapped, are likely to be included in this new round of expenditure.

Although the Chancellor mentioned the money was for free schools, it is worth reminding ourselves that the proposal to build a free school in Rotherham collapsed in farce.”

Hope he gets a reply from the Education Secretary and let’s his constituents know the results.

Shame Mr Barron hasn’t had much (anything ?) to say about Maltby Academy – the BSFF  programme, the ‘sponsors’, the demolition and new building etc etc.Expect he leaves anything to do with Maltby Academy to his governor daughter, Miss A Rushforth (known  locally as Cllr Amy Rushforth) 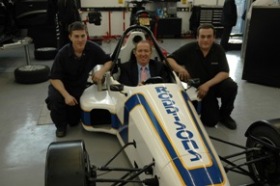 Picture of Kevin with students from Rother Valley College.