Ten out of 22 children’s centres in Rotherham are set to close.

Roger Stone says they are going to provide services to children in “a different way”.

Hope the different way doesn’t involve decisions made and actions taken (or not taken) by Kimber, Lakin and Thacker. 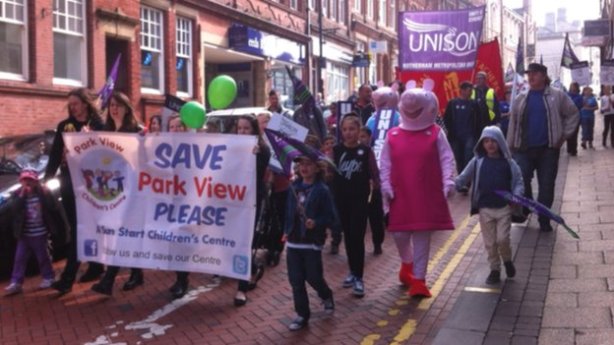 A 6,000-signature petition opposing the cuts was handed in to the council by union Unison earlier amid a protest.

Robin Symonds, from Unison, said despite the opposition, 9,000 signatures were needed to force a full council debate.

In total, 12 centres will remain open including Wath Victoria, Park View and Dinnington.

Mr Symonds said: “The town needs all of its children’s centres open.

The Labour-led council said the centres helped an average of 9,000 children under five and their families each year.

Council leader Roger Stone said: “Even though we may have to close the centres, the aim is to try and ensure that [children’s] services are provided in the areas where they’ve closed.

“But they will have to be done in a different way and that’s why we’re talking to different groups and people.”

Allen Cowles, a councillor for UKIP, which has 10 seats on the council to Labour’s 15, said: “Anything to do with closing children’s services is very disappointing. They are our future and we need to be supporting them in every way.

“We’ll be looking into this and raising it at the next meeting.”  “